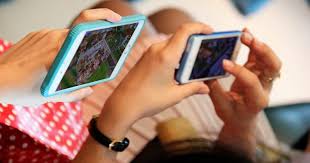 Welcome to TNW Basics, a collection of tips, guides, and advice on how to easily get the most out of your gadgets, apps, and other stuff.

So you’re trying to keep yourself occupied while locked down, quarantined, and otherwise isolated? You want to have some fun and keep in touch with friends, naturally — here are a few games that you can play with your friends despite your separation.

Recently we discussed various other online PC and console games you can play with your friends. However, we realize that not everyone has access to a console or a game-ready PC — for some people, a phone or a simple laptop is all they have to game on. Luckily there are plenty of mobile and browser-based multiplayer games that you can use to keep in touch with friends and family members you can’t see in person. Note that, when it comes to mobile games, we’re naming apps that are available for both iOS and Android.

If you’re up for some board game-style action, the tried-and-true Words with Friends 2 (iOS/Android) and Words with Friends Classic (iOS/Android) are still around. You can also play the classic UNO! (iOS/Android) if you’re in the mood for some card games. Of all the games Nintendo has launched on mobile, Mario Kart Tour (iOS/Android) is probably the one with the lowest barrier for entry, at least when it comes to playing with friends. It’s dead easy to learn, and if its sales on the consoles are any indication, it’s something a lot of people will already be familiar with.

We need to throw in the obligatory mention of battle royale games, as Fortnite (iOS/Android) is almost as popular on mobile as it is on PC. If you’re more of a Call of Duty person, there’s luckily one of those (iOS/Android) on mobile as well. Minecraft is also a staple available on mobile platforms as well (iOS/Android).

If you have access to a browser, there are a number of browser games that can be played with friends. A staple within my communities is Town of Salem, in which some of your friends are the mafia and others are townspeople, and you must figure out which is which. For another game with a group of people, there’s the classic Agar.io, in which you compete to see who can become the biggest circle in the arena. There are also lots of variations on Agar.io out there, like Slither.io (with snakes instead of circles), but the most colorful is probably Powerline.io, which is like combination of Agar.io and the old Nokia snake game.

For a more one-on-one experience, try CubeSlam. A variation on the classic Pong, you bat a ball to each other’s side of the board and have to avoid various obstacles along the way. To play with a friend, you just send them a link to the game, and you’re off. You can also use your webcams to look at each other on the other side of the court as you play, which to me adds a real sense of rivalry to it.

Hopefully one of these games will help get you and your friends through this time of lockdown, quarantine, and distancing. Good luck!