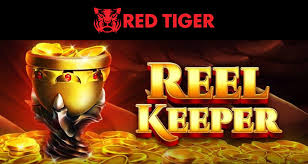 Founded in 2014, by some gambling enthusiasts and veterans of the slots world, Red Tiger has gone from strength to strength. Their games have become established amongst online casinos across Asia and Europe. This award winning design house continues to offer gamers top releases, all created by their in-house team of graphic designers, software developers and gambling market experts. Their products are licensed and regulated by the UK Gambling Commission, Malta Gaming Authority, Alderney Gambling Control Commission and the HM Government of Gibraltar. Like many top slot production houses, they have had a busy 2020 full of new slot releases. Here are a few that have just landed or soon will be landing for you to play at DreamJackpot.

Reel Keeper is an R7 Red Tiger joint production that is played on 5-reels with 10 active paylines. It has the classic design and feel of a Red Tiger game and this makes for an interesting spinning experience. The RTP of the game is a little disappointing and comes in at around 95.71% whilst the jackpot version is even lower at just 93.78%.  It is a high volatility slot, so expect the unexpected. The features here include Dragon Wilds that are fully stacked valuable symbols that may be triggered randomly and are added to the extreme right reel when a dragon flies by. When the Dragon Wild is activated, it jumps one reel at a time and travels across all reels until it vanishes.

Three golden egg symbols trigger 10 free Dragon Spins. During these free spins the dragon interacts with the reels more frequently and this increases the chances of activating Dragon Wilds. When the Dragon Wilds reach the leftmost reel during the bonus, they stay there instead of vanishing.

Aztec Spins is a game played on a 6-reel platform with 30 active paylines. It has a maximum pay out of 4,983x your original stake and the RTP comes in just below the average at 95.71%. The main attraction features wise is the Aztec Wheel, this can award free spins, Stacking Multipliers and Locked Symbols.

Bounty Raid is a wild-west themed slot that revolves around a sheriff trying to catch a band of bandits. It’s a 5-reel 3-row game with 10 paylines with an RTP of 95.71%. The design is quite cartoonish but very similar to other wild-west themed slots. The Sheriff symbol allows the bandits to be rounded up and the combined bounty on the bandits can be collected. The other main feature is the Bounty Hunter re-spins that allow you to collect Gold Coins or Bandits.

NetEnt recently acquired Red Tiger and in doing so they also brought Red Tiger’s Megaways license with them. This partnership has now allowed a NetEnt classic slot to be given the Red Tiger Megaways treatment and the result is of course Gonzo’s Quest Megaways. The original cascading game remains intact but this version is bigger and better than the original and  Gonzo fans will not be disappointed.