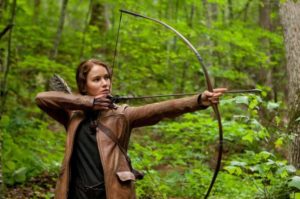 The Hunger Games is getting a sequel (Picture: Lionsgate) Hunger Games fans, get excited. The upcoming Hunger Games prequel by Suzanne Collins officially has a name, a book cover and a release date, and we are pumped. The prequel will be called The Ballad of Songbirds and Snakes, and will be released on 19 May 2020. The cover was unveiled on Good Morning America – featuring a gold mockingjay on a branch which has a snake entwined around it, all against a background of green and black circles. Scholastic confirmed that the first printing run will be an eye-watering 2.5 million copies – so clearly, they’re expecting this to be a hit. The Ballad of Songbirds and Snakes serves as a prequel to 2008’s The Hunger Games, 2009’s Catching Fire and 2010’s Mockingjay, which told the story of Katniss Everdeen who lives in District 12 of the dystopian nation of Panem. Collins’s book will be about the early days of Panem hosting the Hunger Games – where children from the districts are selected via a lottery to compete in a battle royale death match. The author previously said: ‘With this book, I wanted to explore the state of nature, who we are, and what we perceive is required for our survival.