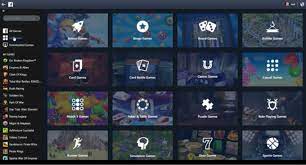 A dedicated gaming app for Windows!

Facebook Gameroom for Windows is a PC app designed to let users play mobile, web, and native video games without the distraction of Facebook’s newsfeed. Widely regarded as Facebook’s answer to Steam, the application is free to download and consists of a large variety of games segregated into different categories. Gameroom’s interface is user-friendly and provides users with an option to watch live game streams. Although the software may not be for hard-core gamers, it is a delight for casual players.

Install and play games directly from your PC
Windows users can now play some of the best Facebook games without logging on to the social media platform. Formerly known as Facebook Games Arcade, Facebook Gameroom download is an independent PC app, which allows users to discover games by genre, recommendations, and categories.

Available for Windows 7 and above, the software is a lite version of Steam, offering games that are usually smaller than 200 MB and free. Nonetheless, developers can upload premium games onto the platform and charge customers using in-app purchases. Gameroom also allows users to install games directly onto their PC, so they don’t have to re-download web-based games, every time they wish to play.

Facebook Gameroom app consists of an array of games, including action games, poker, puzzles, cards, casino, bingo, shooting games, simulators, role-playing games, and more. The app provides you access to a large number of free and paid games, along with smaller versions of popular games.

For instance, you may need Steam to play Counter-Strike Global Offensive. However, you can play a smaller version like Critical Ops, directly from Gameroom. The app’s homepage features recommendations and editor’s picks, both of which can help you find the best games running on the platform.

Moreover, the moment you get tired of playing any game, you can switch and stream live gaming sessions. Players streaming gaming sessions via Facebook Live get automatically listed on Gameroom’s dashboard. The app also includes a chat room giving players from around the globe an opportunity to interact with their opponents.

You can download the app in the same manner as other applications. All you need to do is save the facebookgameroom.exe file and click on it after the download is complete. Facebook Gameroom install takes place automatically, and you only have to login through your FB account to get started. In case you don’t already have an account, the app lets you create one easily.

With Gameroom, Facebook intends to enter the gaming space and directly compete with players like Steam, Uplay +, GOG Galaxy, and more. At the moment, Facebook Gameroom free download for PC comes with no hidden charges. Except for a few premium games, most games on the dashboard are free to install and play.

Moreover, the app allows users to create shortcuts of the games they’ve been playing and lets them share their progress on the social media site. Facebook Gameroom for Android, Mac, or iOS devices is a possibility. However, The Gameroom download is currently only available for Windows PCs.

While there are many alternatives to the Facebook game room, most have been designed for ultimate gamers. Some of the most popular alternatives are Steam and Uplay +. While Gameroom download may not be ideal for advanced players, it’s perfect for beginners as well as casual gamers.

Unless you’re a hard-core gamer with love for games like Counter-Strike and Tekken 7, you will appreciate Facebook’s entry into the gaming world. They’ve put together a dashboard filled with free games ranging in genre, from poker to role-playing, they have it all! The user-friendly interface is very smooth, allows for easy transition between playing and watching, and provides users with an easy share option.

The dashboard consists of a chat room that allows players to connect with different team members from across the globe. While the Gameroom doesn’t consist of games that Steam usually boasts about, it does have its share of popular games. Gameroom users no longer have to go through Facebook’s news feed to get to their game. The app allows users to create desktop shortcuts so they can return to their games whenever they want.