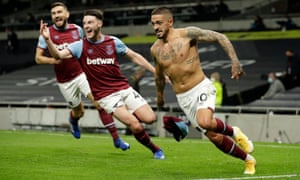 When Gareth Bale finally made his entrance, one month after re-signing for Tottenham and 72 minutes into this derby, it is fair to say that the scene was set. Spurs had a free-kick 30 yards out, to the right of centre, and the returning hero went straight over to take it.

For a few tantalising moments, those present and the watching TV millions wondered whether his cosmic scriptwriter had the most outlandish plot-line in mind. It would have been too much. Bale’s free-kick bounced tamely into Lukasz Fabianski’s arms.

It was 3-0 to Spurs at the time – the home team having run riot in the opening exchanges, Son Heung-min scoring one, the irrepressible Harry Kane two – and it seemed like a fairly easy moment for José Mourinho to get Bale on as a substitute, to get the much trumpeted Second Coming out of the way.

Instead, it was the prompt for a crazy late turnaround that saw West Ham fight back to grab a draw. It really was not Bale’s day. At 3-2, he had tiptoed through only to pull his shot wide and it left the door open for another substitute, West Ham’s Manuel Lanzini, to steal the show.

West Ham had been much the better team in the second half, pushing Spurs back and their lifeline came when Fabián Balbuena headed home from an Aaron Cresswell free-kick. Their second followed shortly afterwards, on 85 minutes, when Davinson Sánchez diverted a Vladimir Coufal cross into his own net and, with Spurs having lost their cool, Lanzini scored a goal that had West Ham fans dancing around their living rooms in sheer delight.

Cresswell bent in a free-kick from the left, which was half-cleared and then prodded out by another substitute, Harry Winks, but only as far as Lanzini. Cutting across the first-time shot with his right boot, he sent it screaming into the far top corner, via a little brush from Hugo Lloris’s fingertips.

David Moyes, the West Ham manager, celebrated on the pitch, overcome by the moment and when the full-time whistle went almost immediately afterwards, Bale wandered off as though in the daze. Welcome back to the madhouse, Gareth.

Bale had taken a socially distanced seat in the Spurs dugout and he could enjoy a lightning start from his team and, specifically, from the two players with whom he intends to form a lethal front three. Kane entered the game with seven goals and an even more eye-catching eight assists in all competitions but he was in the mood to swell those numbers while Son bristled with direct movement and menace.

Mourinho got his tactics spot on at the outset and the game was shaped after 16 minutes as Spurs hared into a 3-0 lead. With Steven Bergwijn high on the right and Son likewise on the left in Mourinho’s 4-3-3 system, Kane was given the license to drop from centre-forward into the pocket, rather like an NFL quarterback in the sport that he so loves to follow.

Tanguy Ndombele, meanwhile, pressed up from centre midfield, playing like a No 10, and Spurs were able to revel in the spaces between West Ham’s lines. Time and again, they drove through the area.

The opening goal showcased Kane’s decision-making and the precision of his long-range passing, not to mention Son’s speed and instinct to run in behind. Spurs broke and Kane had a more obvious ball on up the inside-right channel for Bergwijn but he went over the top and up the left instead for Son and, as soon as he played it, West Ham were in trouble.

One-on-one with Balbuena, Son jinked inside and bent a curling shot into the far corner. Everybody inside the stadium seemed to know what Son was going to do apart from Balbuena, who was nowhere tight enough. There were just 46 seconds on the clock.

Declan Rice will not want to dwell on Spurs’s second, as it featured him being nutmegged by Kane outside the West Ham box and the Spurs striker stepping into the space before burying a low shot past Lukasz Fabianski. From a Spurs point of view, the build-up was slick, Kane starting it and Bergwijn crossing for Son, who recycled the ball via Pierre-Emile Højbjerg to Kane.

Spurs were enjoying themselves, the third coming when they played up through the open spaces in front of the West Ham defence too easily, Moussa Sissoko and Højbjerg finding Son, who moved the ball briskly out to Sergio Reguilon. The left-back’s whipped cross was a beauty and, with Kane bending his run around the back at Cresswell, West Ham were again undone. Kane crashed home the header.

Cresswell had curled a 30-yard free-kick just wide at 1-0 but West Ham could not too much going as an attacking force in the first half and, when Kane threw himself into a block on Coufal just before half-time, it summed up the Spurs’s player all-action contribution. What was he even doing back there?

The second half, however, featured an amazing turnaround, with West Ham resetting during the break and re-emerging with greater purpose. Had Spurs thought the game was over?