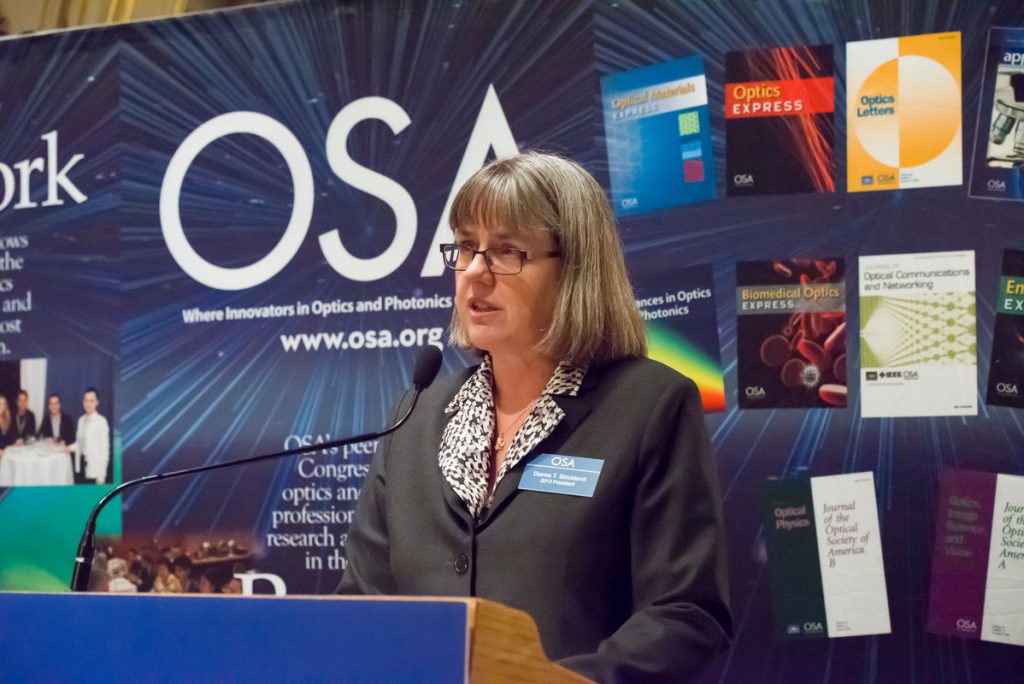 Donna Strickland speaking in 2013 at the Optical Society’s Leadership meeting, during her tenure as president of the organization.
Donna Strickland is an optical physicist at the University of Waterloo. She is also the winner of a Nobel Prize in Physics (as of two days ago), a former president and fellow of the Optical Society, and early in her career was the recipient of a Sloan Research Fellowship.

What did she receive these honors for? Wikipedia editor Avik Dutt, a quantum physicist who goes by “Quantumavik“, told me that her work “pushes the boundaries of how short and how intense light we can produce, [and] it has myriad applications in eye surgery, chemistry, industrial laser machining, and biology and medicine in general.” He continued:

This wide range of applications places them well in the context of Alfred Nobel’s original will for the prize—inventions that greatly benefit mankind. Millions of laser eye surgeries are carried out with laser beams that use ultrashort pulses. The high powers of these pulses, when focused, can cut materials with ultimate precision. The general advantage with using short laser pulses over longer pulses is that they cause less prolonged heating damage while doing their job of cutting the targeted area well. These pulses of light are in fact so short that they can image molecules during a chemical reaction in real-time—something unimaginable by most other methods—by flashing or strobing the molecules during the process. It is like our usual photographic camera, but with a shutter speed that can be turned on and off a million or billion times a second. Even more applications are on the horizon for the extremely high power laser pulses that have been enabled by Strickland’s revolutionary technique.

Despite Strickland’s positions and groundbreaking research, she did not have an article about her on the English Wikipedia[1] until shortly after she was announced as one of the newest Nobel laureates.

Here’s a timeline of what happened with the article about Strickland, why it wasn’t created before now, and what you can do to help.

On 28 March 2018, a new volunteer Wikipedia editor (“Campbpt0”) used the English Wikipedia’s “articles for creation” process to submit a draft for review by experienced Wikipedia editors. That particular process has a backlog of over 4,000 articles, with the waiting time as of publication being estimated at over two months. Campbpt0’s submission was actually reviewed just a bit faster than that, but on 23 May a volunteer editor declined it for the following reason:

What does this mean? It means that the volunteer editor evaluated the draft’s published, “reliable” sources which verify the information about Strickland and determined there were not enough to meet English Wikipedia’s notability requirement at that time. (In general, articles can always be resubmitted with additional supporting sources, should they become available.)

Wikipedia has extensive policies on how to assess the “notability” of a topic—it’s a “test used by editors to decide whether a given topic warrants its own article.” For academics, Wikipedia has supplementary notability requirements that require academics to meet one of nine criteria.

Editors can re-evaluate a subject’s notability whenever new information comes in, as happened after Strickland won her Nobel Prize—indeed, the article’s original creator, Campbpt0, could have submitted additional sources. Unfortunately, they only ever made two edits on Wikipedia, both of which were to create the draft article about Strickland. By the time it was assessed, it appears Campbpt0 had long since left the site.

Were there problems with this editor’s decision to decline? Some Wikipedia editors think so, and there are debates about that occurring on Wikipedia as we go to press. One participant is TonyBallioni, who believes that an online biography of Strickland, published by the Optical Society, was enough to verify Strickland’s notability.

Ballioni also wrote that Wikipedia’s academic-specific notability test “is a merit based standard for people where intellectually independent coverage is difficult.” It’s worth emphasizing this. Academics may be writing many of the sources volunteer Wikipedia editors use to verify the information on Wikipedia, but they are only infrequently the subject of those same sources. And when it does occur, they usually feature men from developed nations—not women or other under-represented groups.

This problem is wider than academia. Wikipedia’s extensive sourcing requirements extends across the site. They have been rightly lauded for keeping disinformation off of Wikipedia, but they also systematically disdvantage entire swathes of people and regions of the world that don’t have much, if any, published material about them.

(You can read more on these points below, and in a Twitter thread by the Wikimedia Foundation’s executive director Katherine Maher.)

What’s up with bias on Wikipedia?

Two frequent criticisms of the English Wikipedia is its persistent gender and systemic biases in both its content and the people who write it.[2] As of the beginning of October, only 17.82% of the site’s biographies were about women, and there’s a great visualization for seeing just how little content there can be in many areas of the world.

That’s why I reached out to Penny Richards to talk about the problems notable women face in getting coverage from Wikipedia. Richards is a Research Assistant Professor at the University at Buffalo‘s Center for Disability Studies and a Wikipedia editor who is an extremely active participant in the Women in Red project. Here’s what she had to say:

The biggest challenge I see with writing biographical articles about living academics is the lack of reliable sources. The lives of working scientists aren’t a frequent topic of mainstream newspaper profiles or magazine stories. I’d love if they were! Even the most dramatic moments of a scientist’s life, like a prestigious award or a major research breakthrough, might only be written about in professional journals, which are literally inaccessible, behind publishers’ paywalls, for many Wikipedia editors.  Donna Strickland’s case is a good example: she won awards before the Nobel Prize, but if those achievements were never reported where editors can read them and cite them, they cannot be mentioned in a Wikipedia article. So a big part of the problem is finding good and accessible sources.

All of this is true for scientists of any gender, of course. But there are known, real, entrenched barriers keeping women in academia from rising to notable positions like full professor, or dean, or president of a professional organization, or keynote speaker at a prestigious conference. So even someone like Donna Strickland doesn’t seem notable enough, on paper, until she actually wins a Nobel Prize.

Wikipedia can’t make major newspapers cover scientists’ lives, and we definitely can’t fix the sexism in academia. But we can (and do!) work on making more academic resources accessible to editors (through The Wikipedia Library, for example), and reaching out to and supporting a wider array of editors to use those resources effectively. The upcoming editathons around Ada Lovelace Day this month, in Edinburgh, Washington DC, Bristol, and elsewhere, and WikiProject Women in Red’s virtual focus on women in STEM this month, will be great opportunities to address some of these gaps while they’re fresh in mind, and in the news.

What can you do to help?

First and foremost, you can sign up and start editing Wikipedia. The encyclopedia operates on consensus, so every voice can and does make a difference. Here’s a few resources:

Second, are you in a position where you’re able to influence the production of secondary sources to make them more representative? As Maher said on Twitter, “Curators, academics, grantmakers, prize-awarding committees, and all other gatekeepers — you too are responsible. When you do not recognize, write about, publish, or otherwise elevate women, queer folks, people of color, and others, you erase them and their contributions.”

(This would come in addition to Wikipedia’s own issues—”we need more nuanced understanding of reliable sources, a more inclusive and flexible application of notability, more diverse contributors, and a more welcoming and inclusive editing culture,” Maher said.)

Third, you can follow and support the work people and organizations like Whose Knowledge?, Wikimujeres, Art+Feminism, and AfroCROWD are doing.

The Wikimedia Foundation does not control editorial content on Wikipedia or any other Wikimedia projects. That is up to a global movement of volunteers who seek to make the sum of all knowledge freely available to every single person.